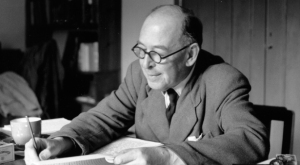 In his wonderful little novel, The Great Divorce, C.S. Lewis described a very different vision of Heaven than that glibly gobbled up by most. Instead of a wispy wonderland where ethereal beings drift in and out of some floating field of clouds lit with laser light show, new arrivals find themselves confronted with such solidity of Spiritscape as to be dangerous, if not lethal, to their fragile forms, ghostlike in comparison to the ultra-reality of the Higher Realms.

There is a tree hung with marvelous fruits of gold. One newcomer, with an eye for opportunity, decides to get some of these items imported to the Hell Zone where they’d certainly fetch a nice price. Problem is: he can lift nary a one from the ground. They may as well have been cast in iron and held fast by the most powerful supermagnet in the universe.

Too real for those hands, made of misty Maya, to clutch.

The narrator of the tale, a certain fellow with a fondness for furs and fauns, can’t even cross a small stream in this new territory. The waters catch and carry his airy body as if it were a dry and wind-tossed leaf being knocked down a conveyor belt.

Unlike many mainline Christian views on the matter, Lewis’ treatment of Damnation is not one in which adherence to correct dogma determines one’s eternal state of affairs. Regardless of belief or perspective, no one hanging about in Hell is forced stay a moment longer than they choose.

In fact, there is actually a magic bus making daily rounds from the Center of Hell to the Pearly Gates. You just need to get on and take a trip. 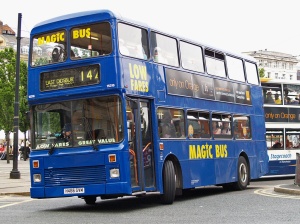 “Fare is FREE…and they actually pay YOU if you ride on the TOP!”

This open door policy, however, isn’t quite as simple as it initially appears. One might be inclined to think Hell’s shopping strips would have closed up long ago if the customers didn’t have to stick around.

Here we find incredible insight from Lewis in this book. In fact, I think he’s a bit in league with the Tibetans who regard all impressions rising up in the Bardo States between lives as projections of the mind.

We don’t all drum up Dante when making this trek. Lucifer lunching on Judas is more likely to appear as a billboard pushing McDonald’s latest dollar menu.

Now, I believe the traditional theories on Hell hold if we can regard them away from the Thou Shalt Knots.

In essence, the human being is born into a shitstorm.

Prior to popping the mucous plug between Mommy’s belly-pod and that sad farewell to your Pal Placenta, you’ve been infected with this disease called ORIGINAL SIN, the nature of which Phil Dick described, in a private correspondence, as “Being Fucked Up.” Potential at first and typically well-realized in the twinkling of an eye.

An entropy timer on the upper right hand of your computer monitor begins to run and you’ve got just a few short years to beat the disease before you wind up at a certain bus stop.

Sounds about right to me. 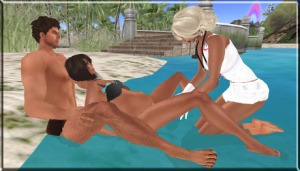 This death run is BIG BUSINESS. When the economy takes a nosedive, there are certain stores which will never need to scrawl a sad sayonara with sharpie on cardboard to hang in the window. Gas stations, grocery stores and “gentlemen’s clubs” will just adjust their prices and the same crowd keeps rolling in.

The necessities of life, right? Forget the bric-a-brac. Target what someone cannot live without and sort the plan to ensure they get it from YOU.

Theologies break out on the planet like an insect-swarm. Half of the time you don’t even get the option of purchasing a can of Raid. Your parental custodian units are more than happy to see their little bundle of joy fed upon by their preferred parasite of choice. They’ll likely even earn rewards for future purchases.

Ever ask someone what their religious views are and they tell you how they were RAISED?

The program is still functional, held onto in the attic of the mind, “just in case.” 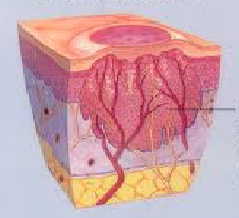 The situation (so swiftly siphoned by those in the know) is rooted in the flowering of consciousness and its tendency toward self-awareness. If you don’t transplant that weed-and fast-we could be looking at a full blown existential crisis leading to strange political views, private mysticism and other assorted perspective points which threaten tight and highly protected levels of societal control. You could be seriously cutting into someone else’s profit margin if your NEW DISEASE starts to spread in the pig pen. The lunch meat in waiting may just decide that farm life doesn’t suit them anymore.

Most pen-pigs, however, are well bred to stick with the Devil They Know. Some rabble-rouser could tear up the fence and, like dutiful doggies, any inadvertent wander-fest will find them wagging their little tails all the way home, even as Charleton Heston is screaming from the wayside: “Soylent Green…is PUPPIES!” 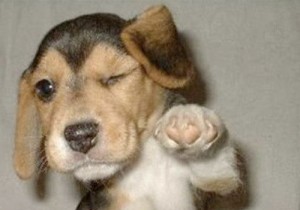 Little Lucy pushed through petticoats and saw Satan sauntering about with her Father’s face. Demon Daddy, unhappy with the report card, showed her the way to a lifelong career in conformity, the perimeter of which defined an extraterrestrial exoskeleton wherein her heavy heaving heart would be washed down with a glass of chianti, bottled on her birthday.

A small group of Junior Bodhisattvas calling themselves the “Shunyata Supersquad” happened to be on Christmas Break from H.U. (that’s “Heaven’s University”-no connection with Eckankar) and took her on as a personal case. They were in like Flynn and busted through the beastly bones in a 93 second long display of killer CGI effects with KMFDM’s “ANARCHY” as backing track. The editing room cut this straight into a heartwarming dialogue wherein Lucy was spoken to of her Father & Mother Who Art In Heaven. The camera lingered on the back of the bus as it lifted off the ground, sailed off to the Empyrean and snowflakes shimmered into a fabulous foreground fade-out. 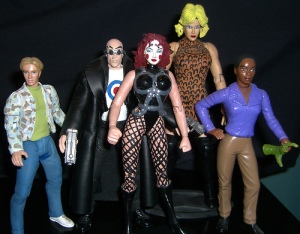 Lucy was back with her bags that night.

After all, it was Christmas Eve and she needed to tell Daddy about her promotion at work. He wasn’t too pleased with how her life had turned out and he certainly wouldn’t have been impressed if she missed hot ham and tedious tabletalk to gaze at a bunch of golden apples.

Meanwhile, the Parasite from Pluto had rebuilt itself and was stuffed into a stocking, camouflaged as an innocuous item meant to provide pleasure while downloading critical updates to the Guilt File on Lucy’s Heartdrive.

It all looked like another dull round, as Blake would say. And it was. Lovecraftian Horrors continued their pernicious partnership with E.T. parasites who bred in the brain just as flies leave their squirming young in flesh gone gray. All to the tune of Bing Bloody Crosby. 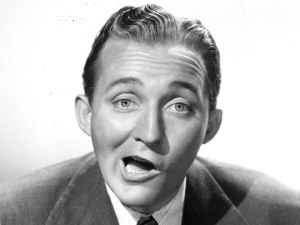 “I’m dreaming of a White Witch…”

The Good News (read: “Gospel” if you like Jesus, “Glad Word” if you like Horus) is that the bus always runs on time-and the Supersquad isn’t slacking with their studies this semester. All 5 of them are maintaining straight A’s in “Skillful Means Level Two” (albeit with a few bamboo stripes that will probably leave scars).

At the campus commons, they’re planning their Spring Break (and Lucy’s Break OUT).

In truth, they ARE Lucy and they aren’t going to rest until the beatles are broken and she’s back in the sky, dancing to the Diamond Sutra.