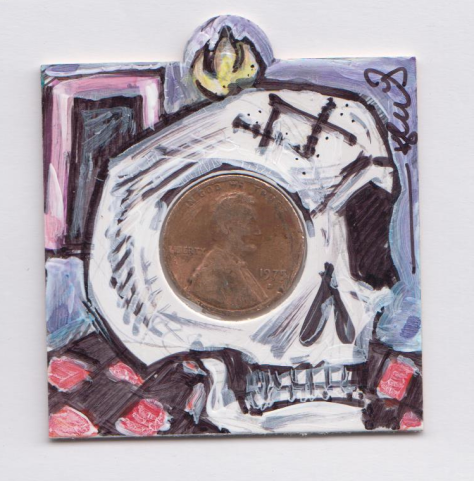 Notes re: the fashioning of a flip (from the Numisgnostic Notebook):

Change retrieved via a quick stop at the local gas station yields up a Death Head Lincoln. The coin isn’t etched by a rail-riding hobo. It’s clearly gone through the grind of vending machines and the like. The result? The profile of the 16th President of the United States worn, by chance or fate, into a skull.

The skull is read along Masonic lines. Not a morbid image of death but rather THAT WHICH REMAINS. The Eternal. The Self, no longer masked by the ego which has been aptly labeled the “Psuedo-self.”

Hence, this flip incorporates the image of the Square and Compasses, the conjoining of terrestrial and celestial space, our mortal life joined with an eternal consciousness transcending the wilting ego’s identification with the Psuedo-self.

The Mosaic Pavement-or checkerboard-is the field of seeming duality in which the Trifold Flame (a variant on the Hebrew letter SHIN) manifests to commence the creative work of the Tekton.

This particular coin, conjoined with its painted housing, is neither a Memento Mori nor Carpe Diem. Rather, its function is to serve as a magical link to the ever-present Interzone between self & Self whereby is realized the Gnosis of the “Word made Flesh.” As such, it now serves as the Corrosion Corp as a Temple Talisman.”